Virtual exhibition of HNM Semmelweis Museum, Library and Archive of the History of Medicine

© HNM Semmelweis Museum, Library and Archive of the History of Medicine, Budapest, Hungary 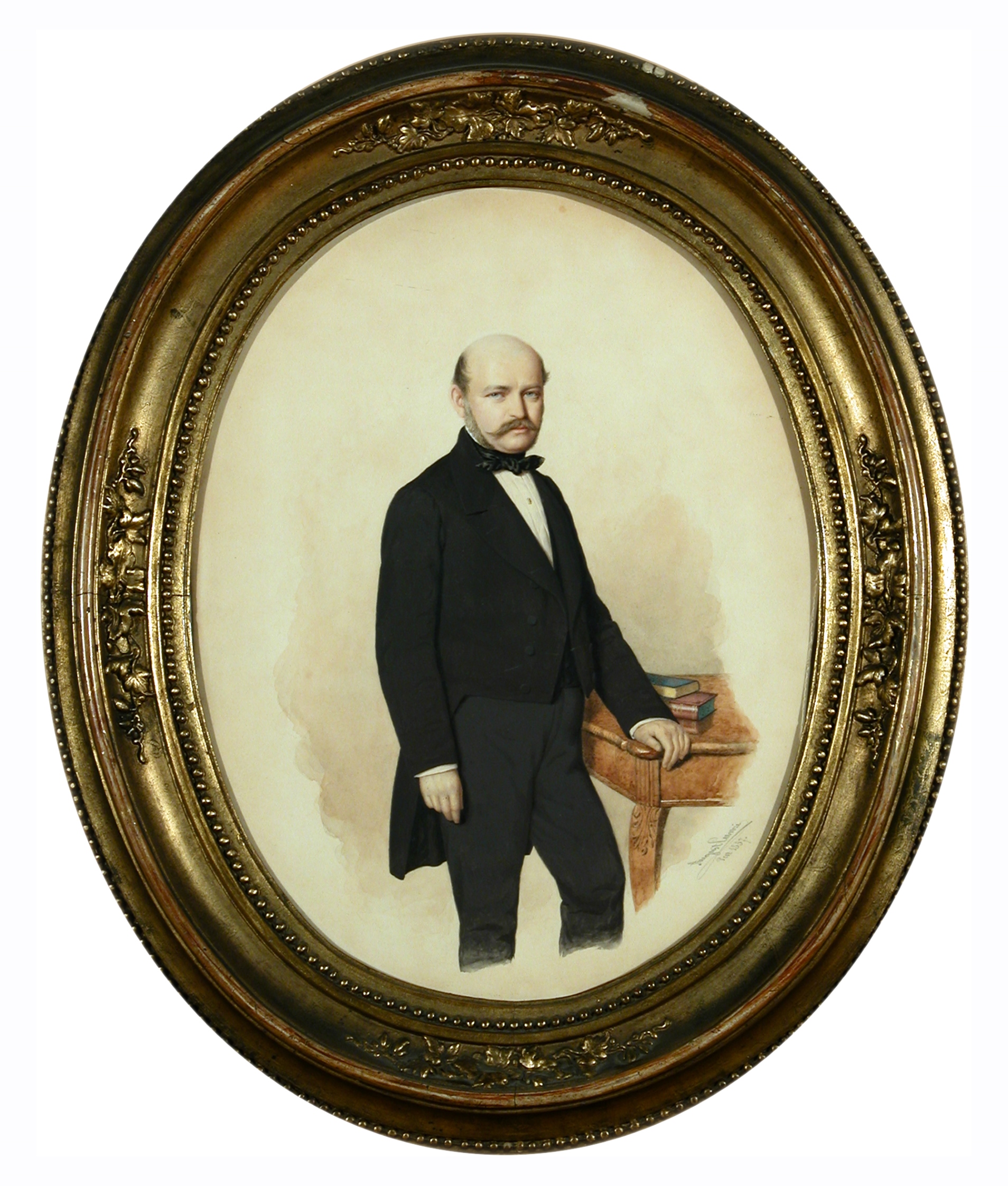 According to the customs of the day, a wedding memorial portrait was made of the nineteen- year-old Maria Weidenhoffer and her groom, who was exactly twenty years older. Following the usual arrangement of portraits of couples, the man’s figure is looking at the audience, turning towards the woman on his right, while the woman, wearing a blue wedding dress in the fashion of the time, is positioned in the opposite direction. The couple of portraits was painted by Ágost Elek Canzi (1808-1866), an Austrian painter born in Baden near Vienna, who after studying in Stuttgart spent fifteen years in Paris visiting Ingres’s studio. He moved to Budapest in 1846 and became famous as a portrait painter. He was especially popular among women for his mawkish painting style, but he also produced Biedermeier portraits of István Széchenyi, Ferenc Deák and Mihály Vörösmarty. Apart from a childhood picture, this is the only portrait paited of Semmelweis during his lifetime, therefore the features depicted by Canzi can be discovered in several of his posthumous portraits. In later photographs he has an older, more broken look. 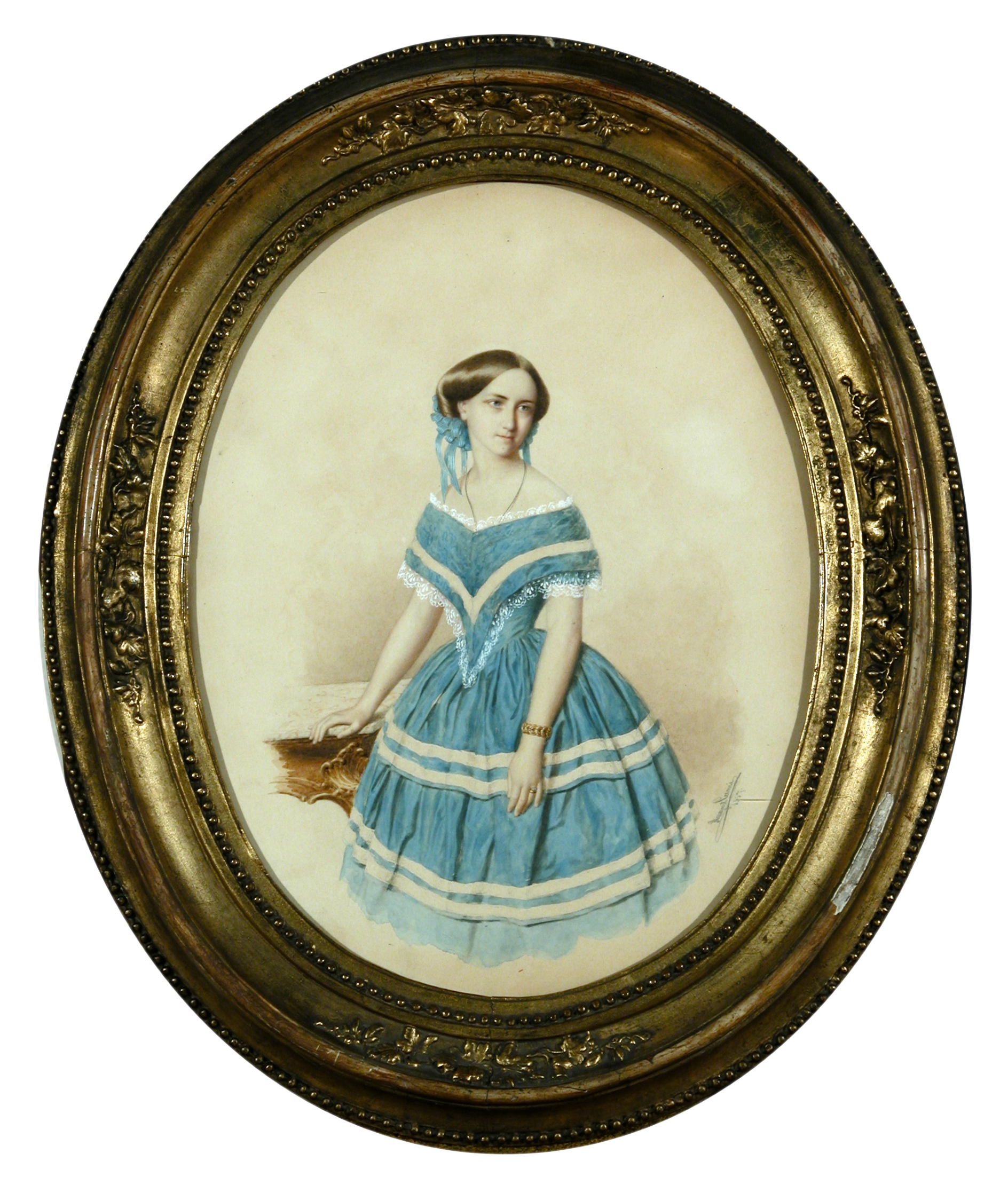 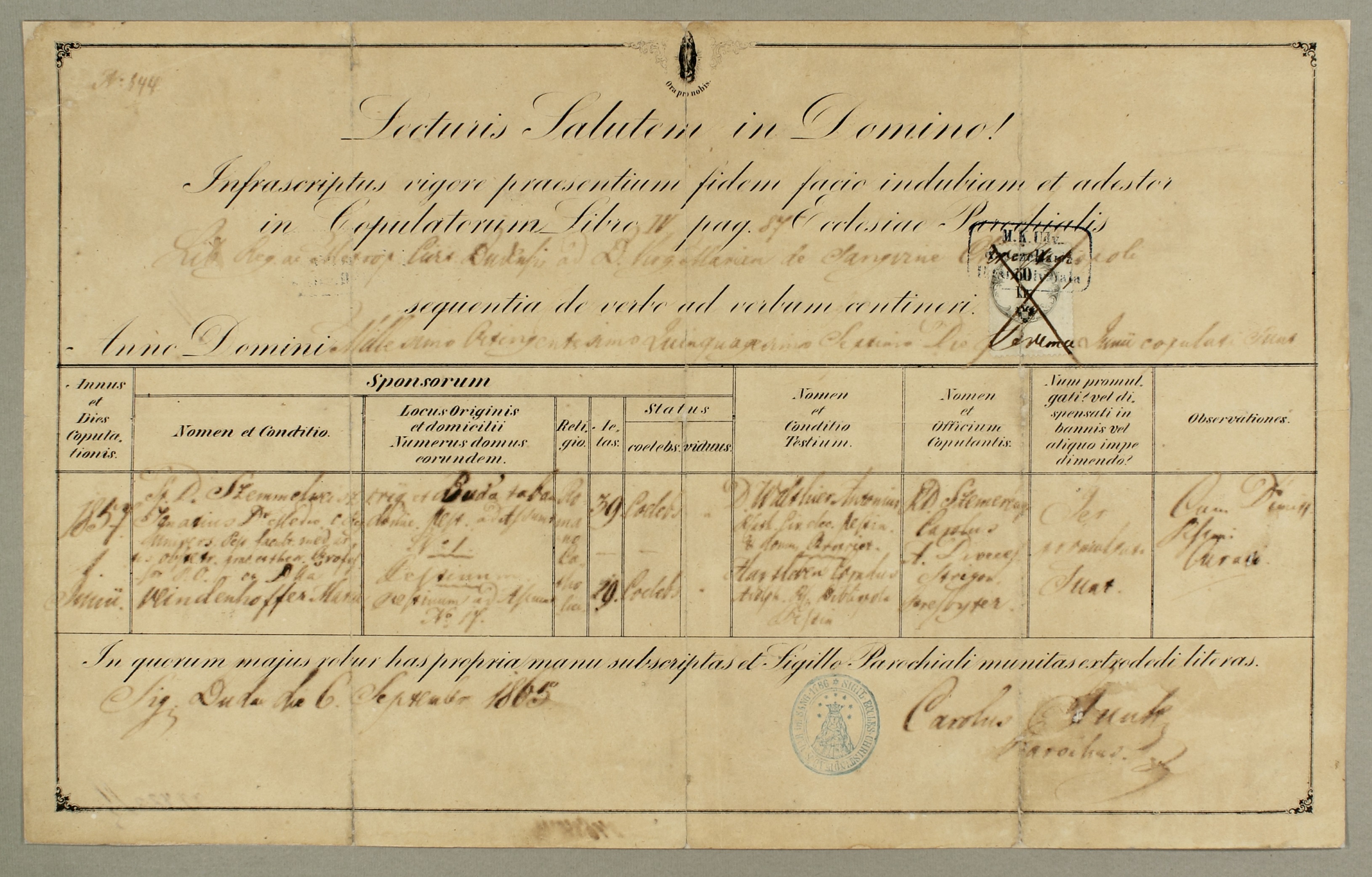 Ignaz Semmelweis married Mária Weidenhofer (1837-1910), who came from a well-to-do German-speaking family from Pest, on 1 June 1857. Her father, Ignác Weidenhofer gained his wealth from trading, similarly to the Semmelweis family. At that time, Ignác Semmelweis had already been an appointed professor at the university of Pest, and in 1857 he was also invited to teach at the University of Zurich. However, he did not accept the position, a decision most probably influenced by his upcoming wedding. The marriage was blessed in the parish church of Our Lady of the Snows in Krisztinaváros, Budapest. The ceremony was performed by Ignác Semmelweis’s brother, Károly Fülöp (1813-1898), who had regained his right to celebrate a public mass only a year before. He was stripped off that right when he was punished for his role in the War of Independence. Károly, who had his name Hungarianised to Szemerényi already in 1844, was a defining figure in the group of Germans from Pest-Buda who exposed their patriotic feelings towards their Hungarian homeland and encouraged their fellow-citizens to do the same. He was also a highly respected figure within the family, not only as the priest performing the services at weddings and baptisms, but also as someone exerting strong intellectual influence. 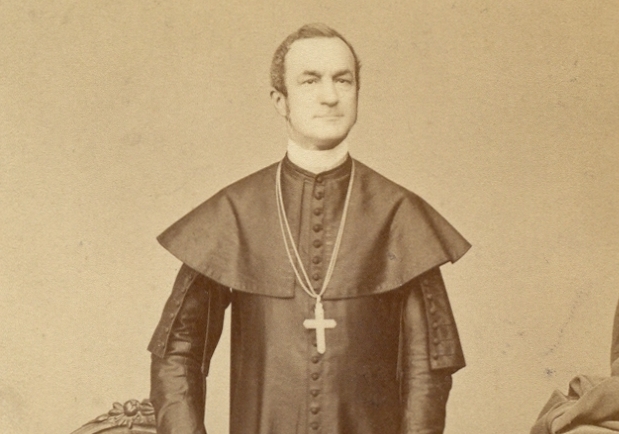 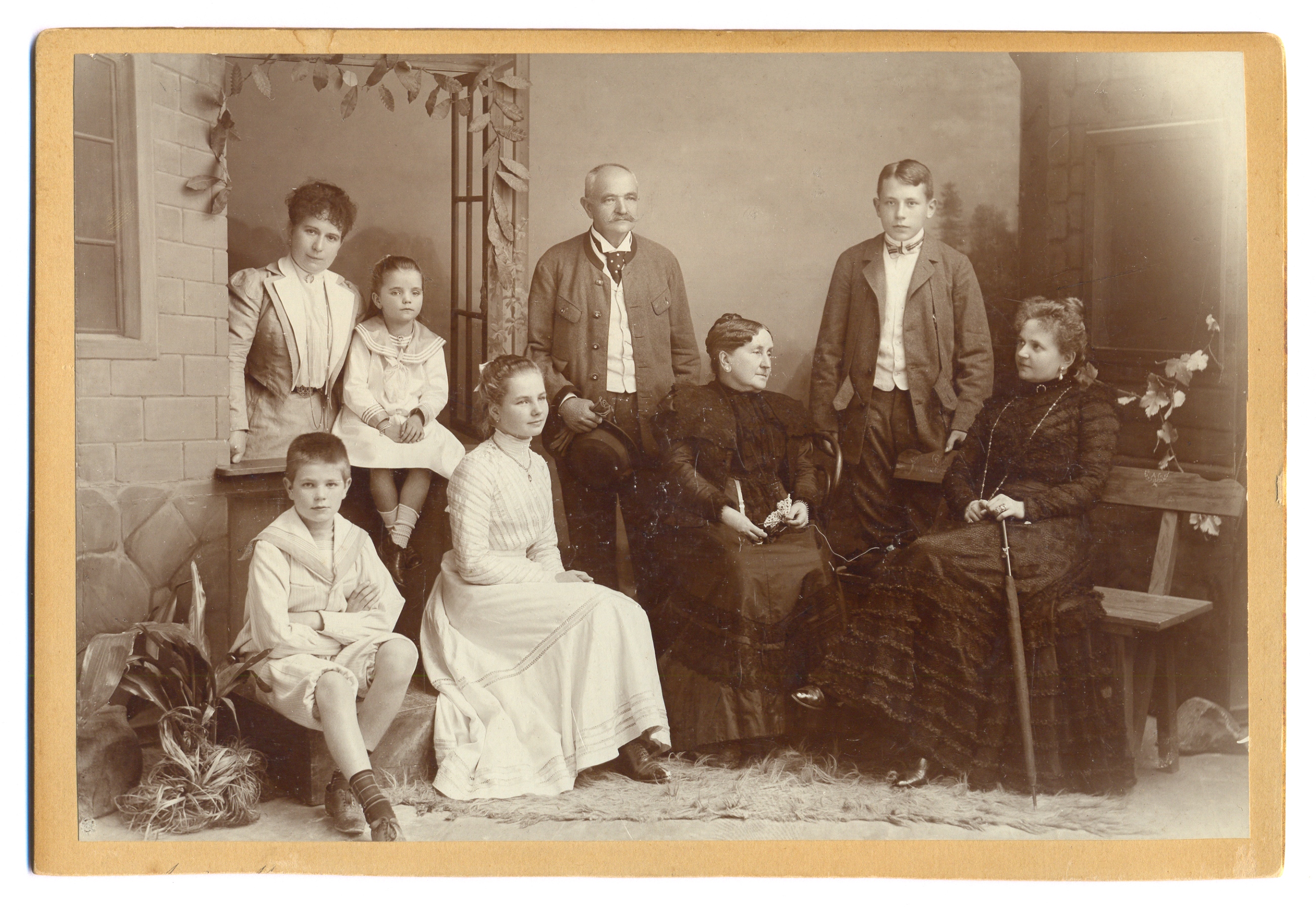 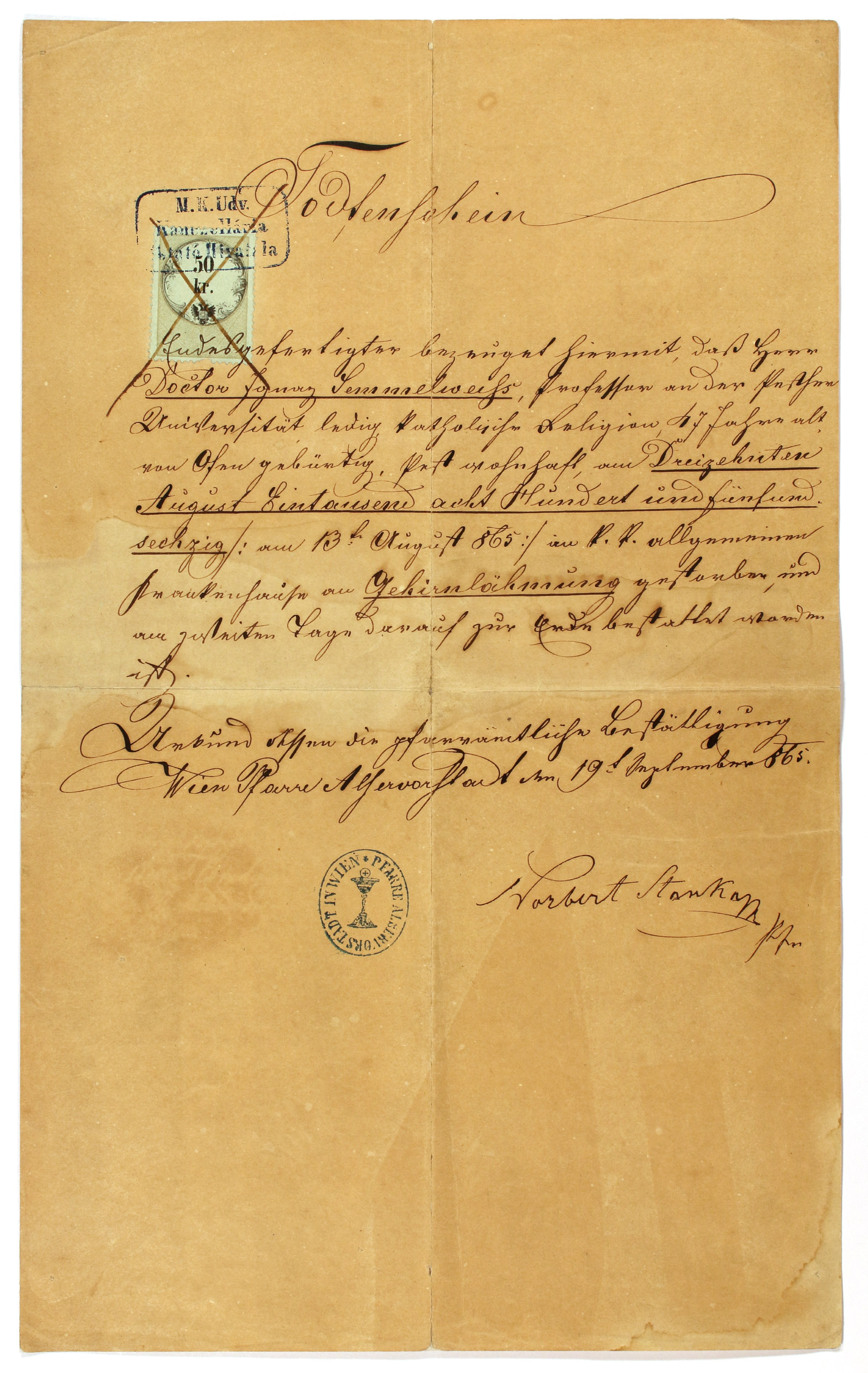 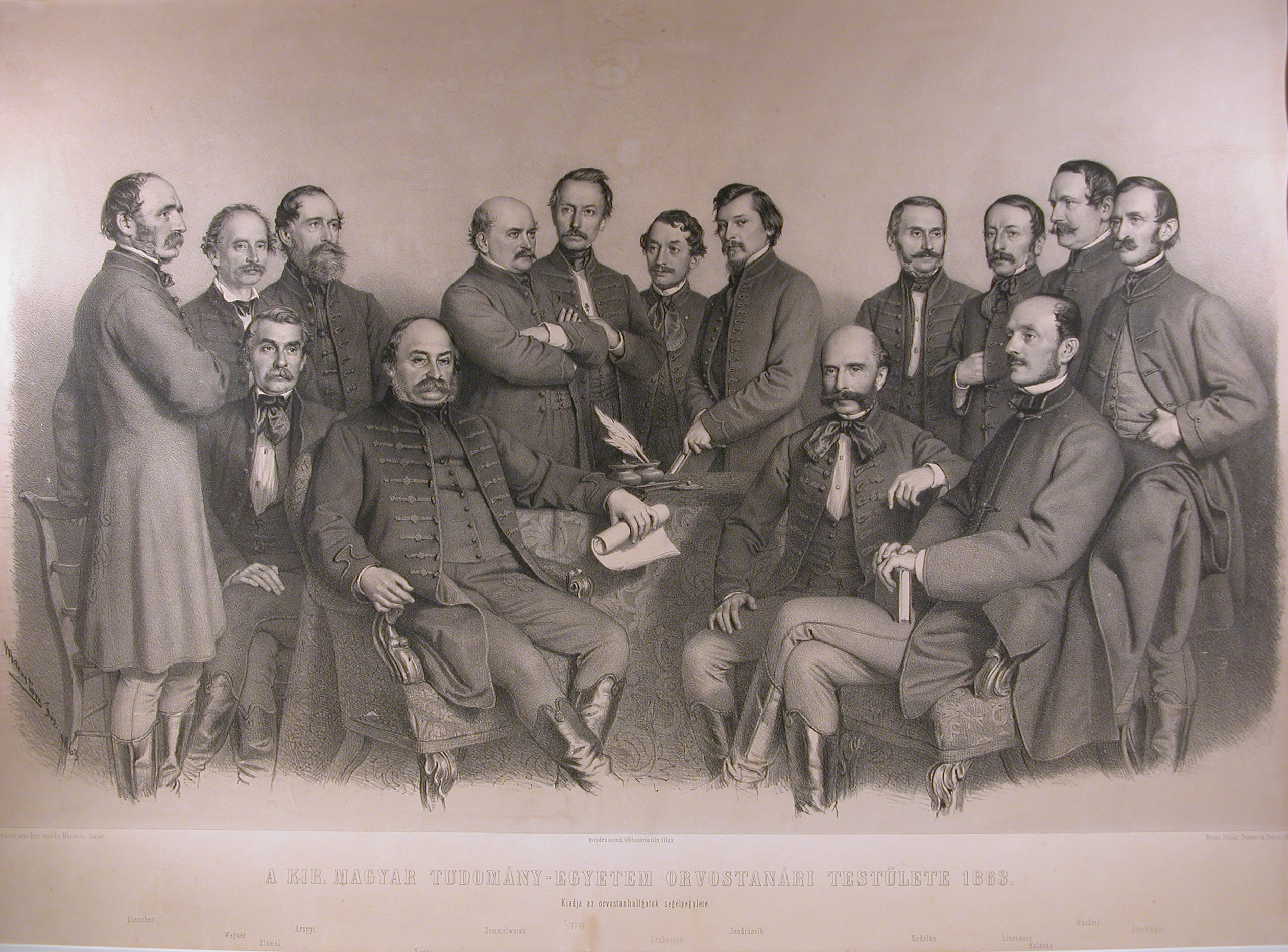 Following his studies in Pest and Vienna, Semmelweis worked as an Assistant Professor in the 1st Gynaecological Clinic in the imperial capital of Vienna until March 1849. It was here in May 1847 that he devised his thesis on the origin of childbed fever, discovering that it was not an infection that occurred and spread independently, but one caused by the degradation of organic materials, which was in fact passed on by medical personnel to the women in their care. His observations were based on statistical research, namely the difference in perinatal mortality between two departments of obstetrics, one attended by medical students who participated in autopsies and another staffed by midwifery students who did not perform autopsies. He pointed out that the symptoms of childbed fever are identical to those of sepsis. He ordered the introduction of thorough hand-washing with chlorinated lime as an infection control and prevention measure. However, he only gave a single lecture on his results and later tried to disseminate his findings to a wider audience via correspondence. He published his first article on the subject in Hungarian in 1858 and his main treatise in German was only published in 1861. In 1851 he became a senior physician in the department of obstetrics at Rókus hospital in Pest. Later, in 1855, he began teaching as a Professor of Obstetrics at the University of Pest and simultaneously led the Obstetrics Clinic at Újvilág Street where not a single woman died due to childbed fever in the period of 1860–1861. 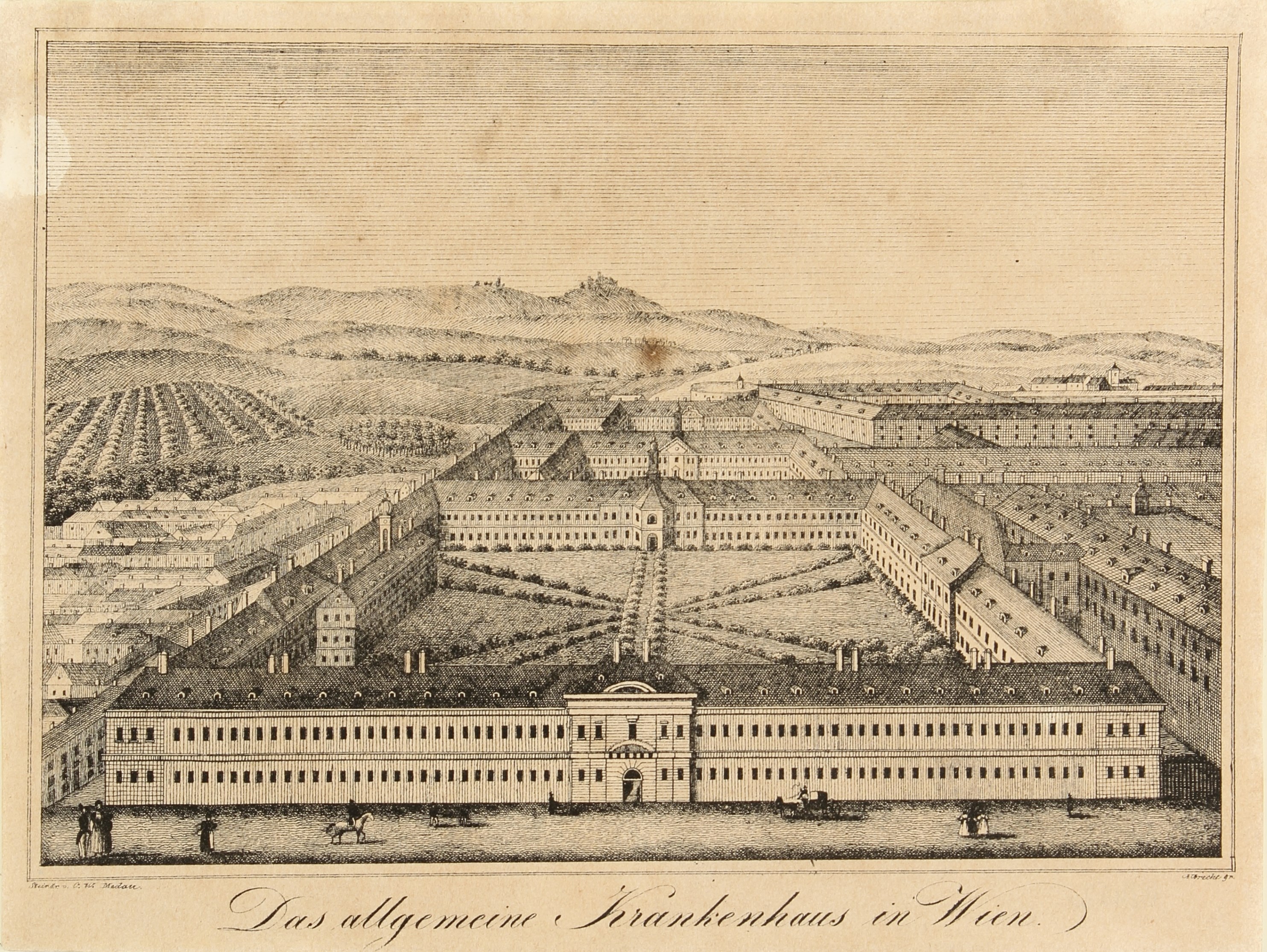 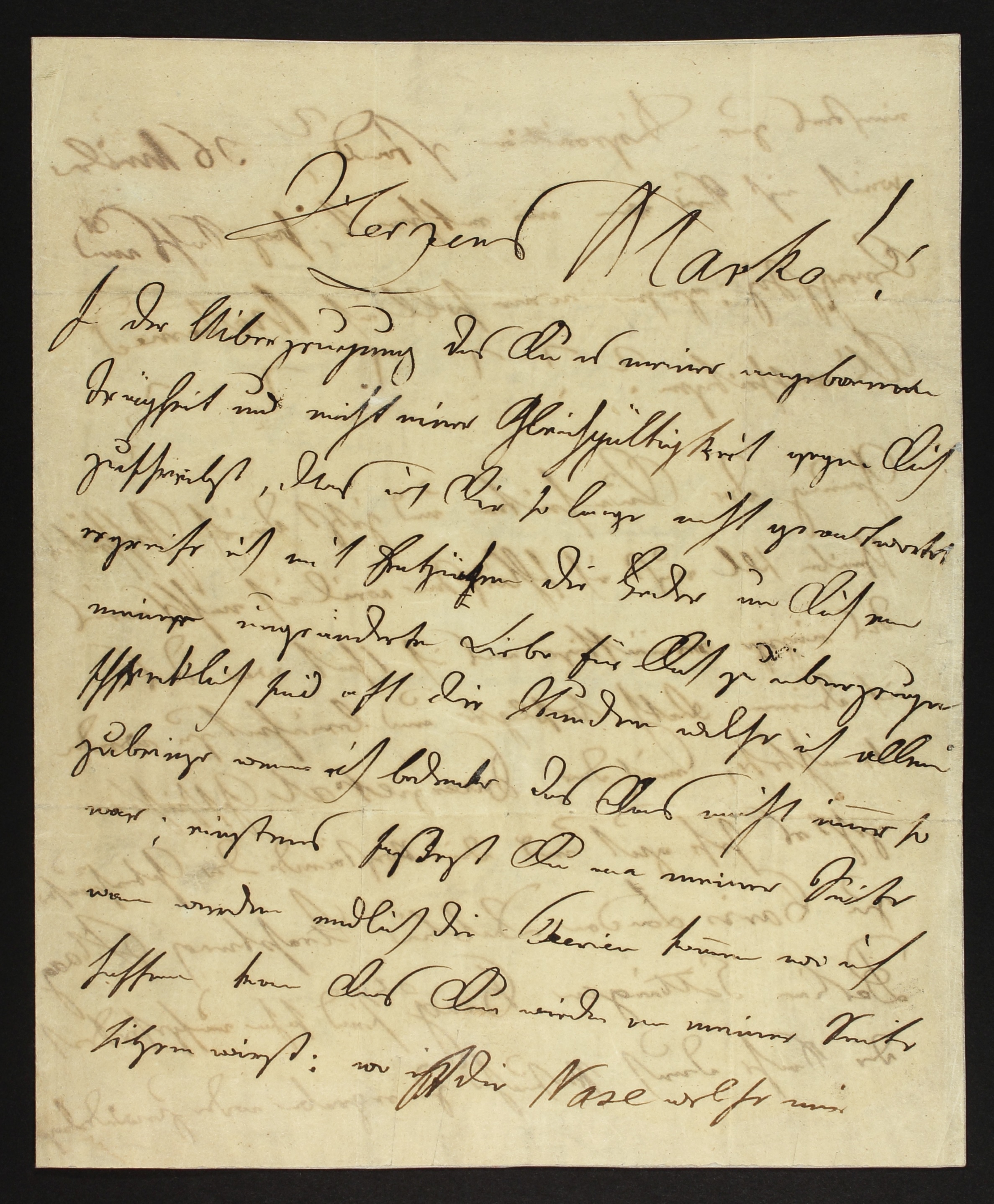 „...the case of childbed fever goes on well, the council of hospitals in Paris, London, Dublin, Strassbourg, The Hague, Berlin, Göttingen, Prague, etc. Have been asked to research or refute the findings through experiments.” 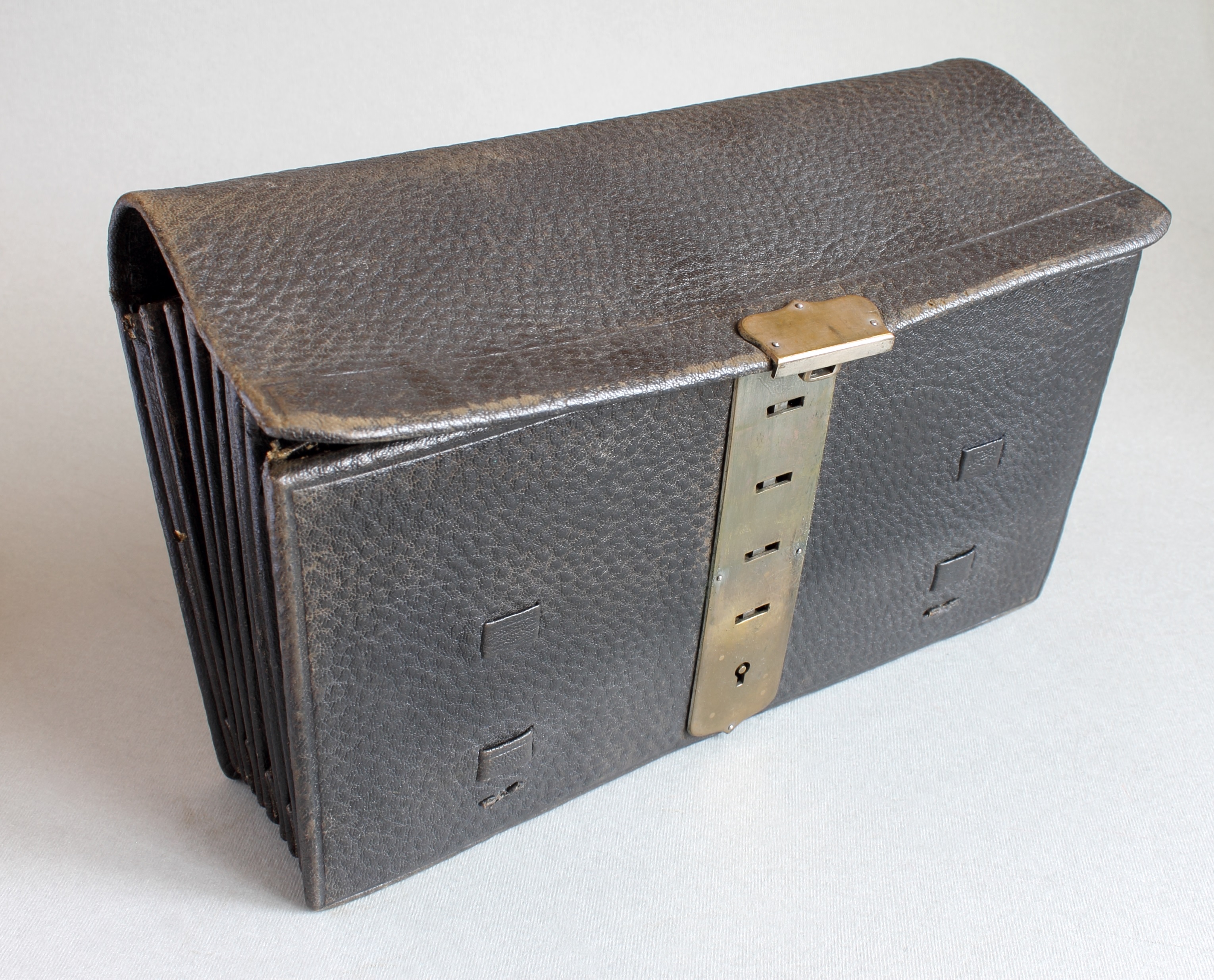 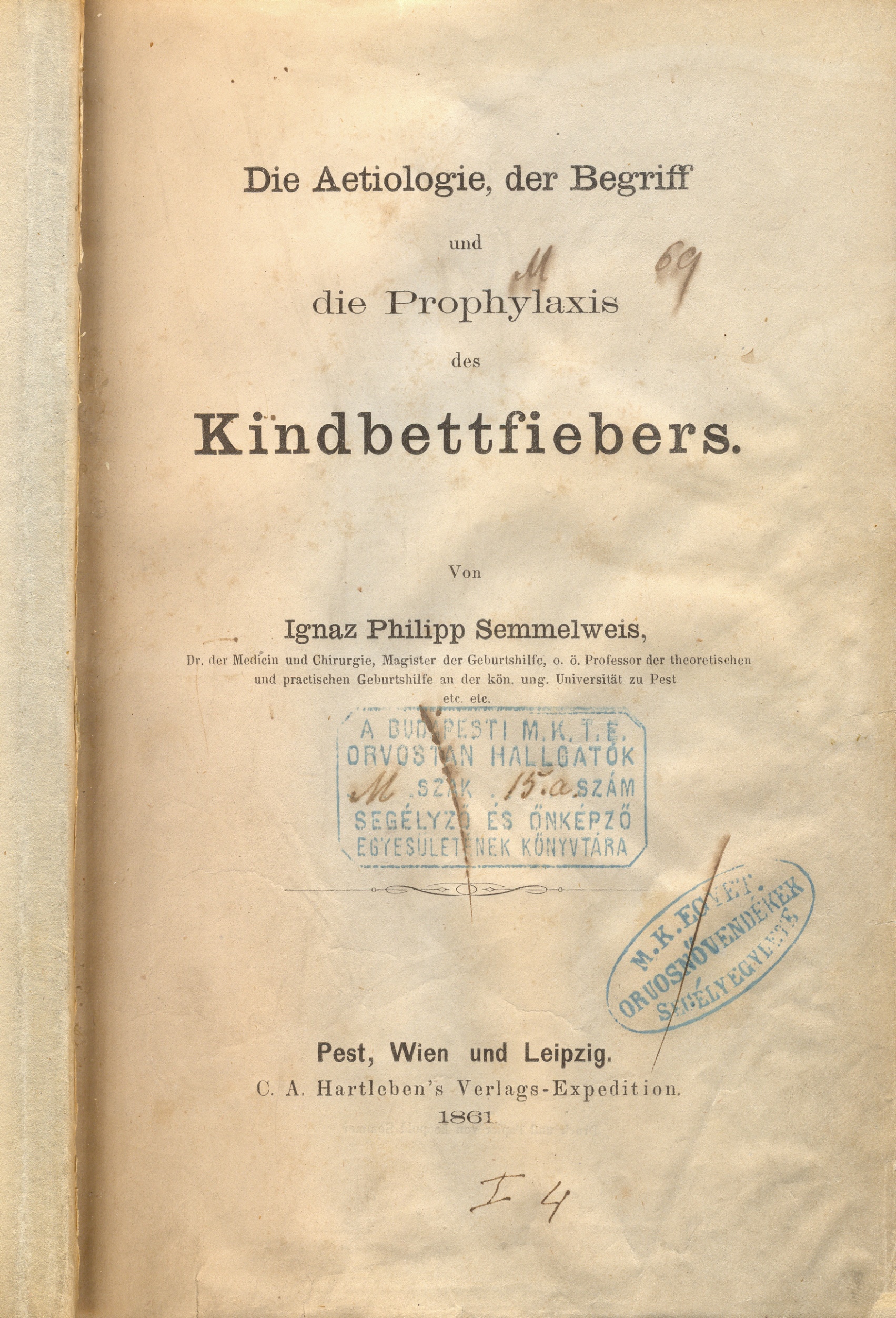 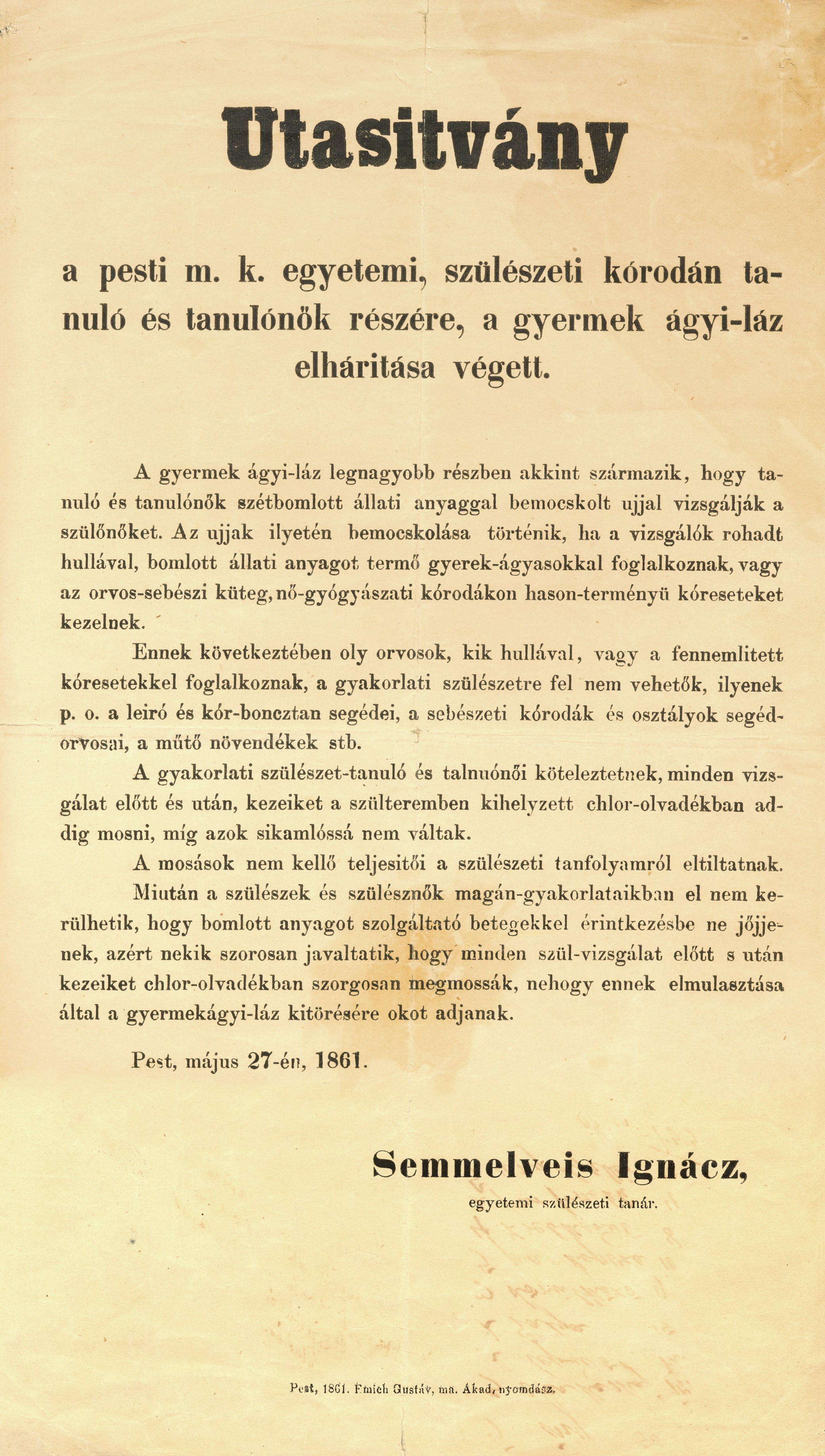 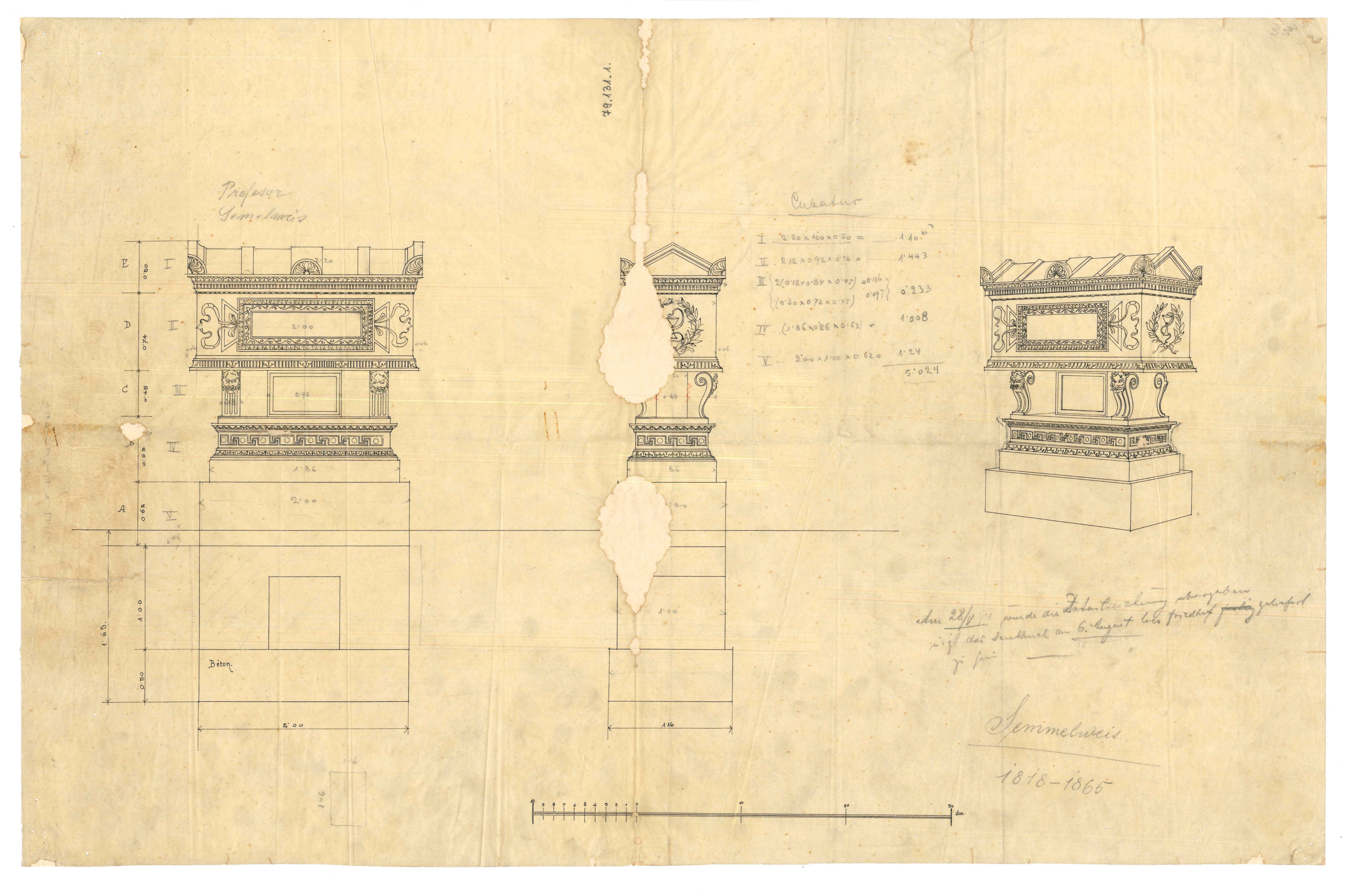 Bacteriological research verified Semmelweis’s claims after his death, and even though his disciples carried on with his clinical research and there was no doubt about the recognition of his work, conscious efforts to recognise him as one of the medical greats only began in 1891. The closing of the Vienna cemetery where Semmelweis was buried provided the opportunity to transfer his remains to Hungary and inter them in an honorary grave, including him in the pantheon of Hungarian scientists and artists established in the Kerepesi Street cemetery. The Semmelweis Memorial Executive Committee jointly established by the Medical Faculty of the University of Pest and the Budapest Royal Medical Association was tasked with providing a fitting grave for the physician and scientist, having an artistic portrait made, while also preserving, translating and issuing a collection of his works. In addition to starting an international collection for his tomb, donations were also accepted for a sculpture to be erected in a public space. They wished to spread and promote his recognition both nationally and internationally. In 1894, Albert Schickedanz (1846–1915) completed a marble sarcophagus meant to convey universal esteem, and its dedication ceremony was part of an international demographic convention.

The Memorial Committee only completed its tasks in 1906 when the sculpture of Semmelweis by Alajos Stróbl (1856–1926) erected in Erzsébet Square was unveiled in the presence of illustrious international scientists. This sculpture was later moved and re-erected in front of St. Rókus Hospital. According to the specifications of the Committee, Semmelweis was depicted wearing Hungarian national attire, but the simple clothing of the other figure in the sculpture, a mother expressing her gratitude, was meant to represent mothers all over the world. Újvilág Street, where the original building of the Obstetrics Clinic was located, was renamed Semmelweis Street and a memorial plaque was placed above the gate of the house where Semmelweis was born. Semmelweis finally assumed his deserved place in the pantheon of Hungarian doctors when the Royal Medical Association named the newly built assembly hall in its Szentkirályi Street headquarters after him (1912), and his portrait painted by Lajos Jámbor (1884–1951) was placed on its wall in 1923. Semmelweis’s name and accomplishments have been preserved by many master-works of art, cinema and literature throughout the world, but were only provided with a final deserved celebration by converting his house of birth into a museum bearing his name and establishing a final resting place for his remains in its garden (in 1964). The arc of his journey is now complete from cradle to grave and his remains are lovingly guarded by the stone monument of the Semmelweis house in Tabán. In 2013, UNESCO declared Semmelweis’s scientific works a universal part of the Memory of the World. 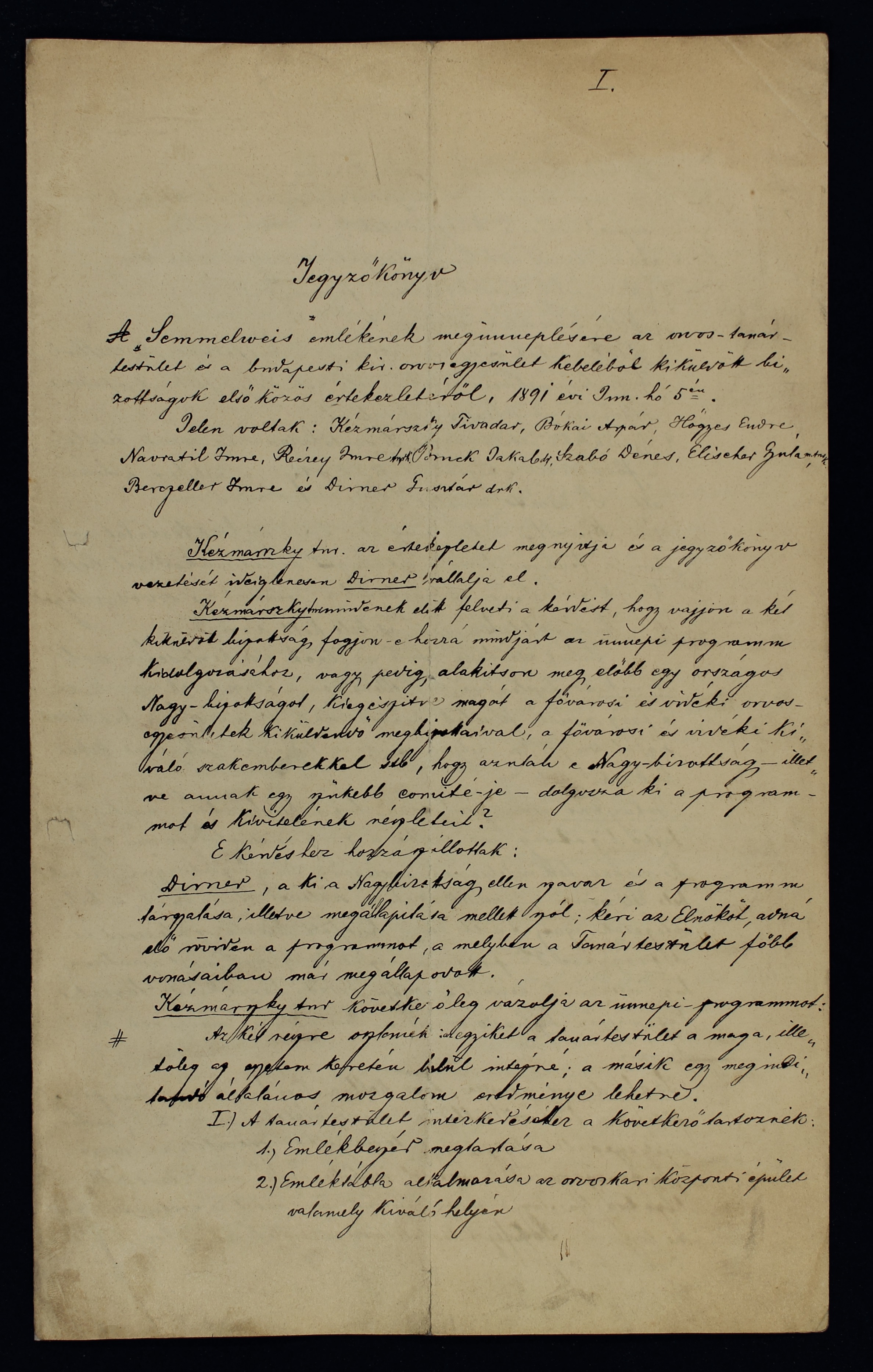 Memorial plaque from tomb of Semmelweis in Budapest (Kerepesi Cemetery)

›
Memorial plaque from tomb of Semmelweis in Budapest (Kerepesi Cemetery) 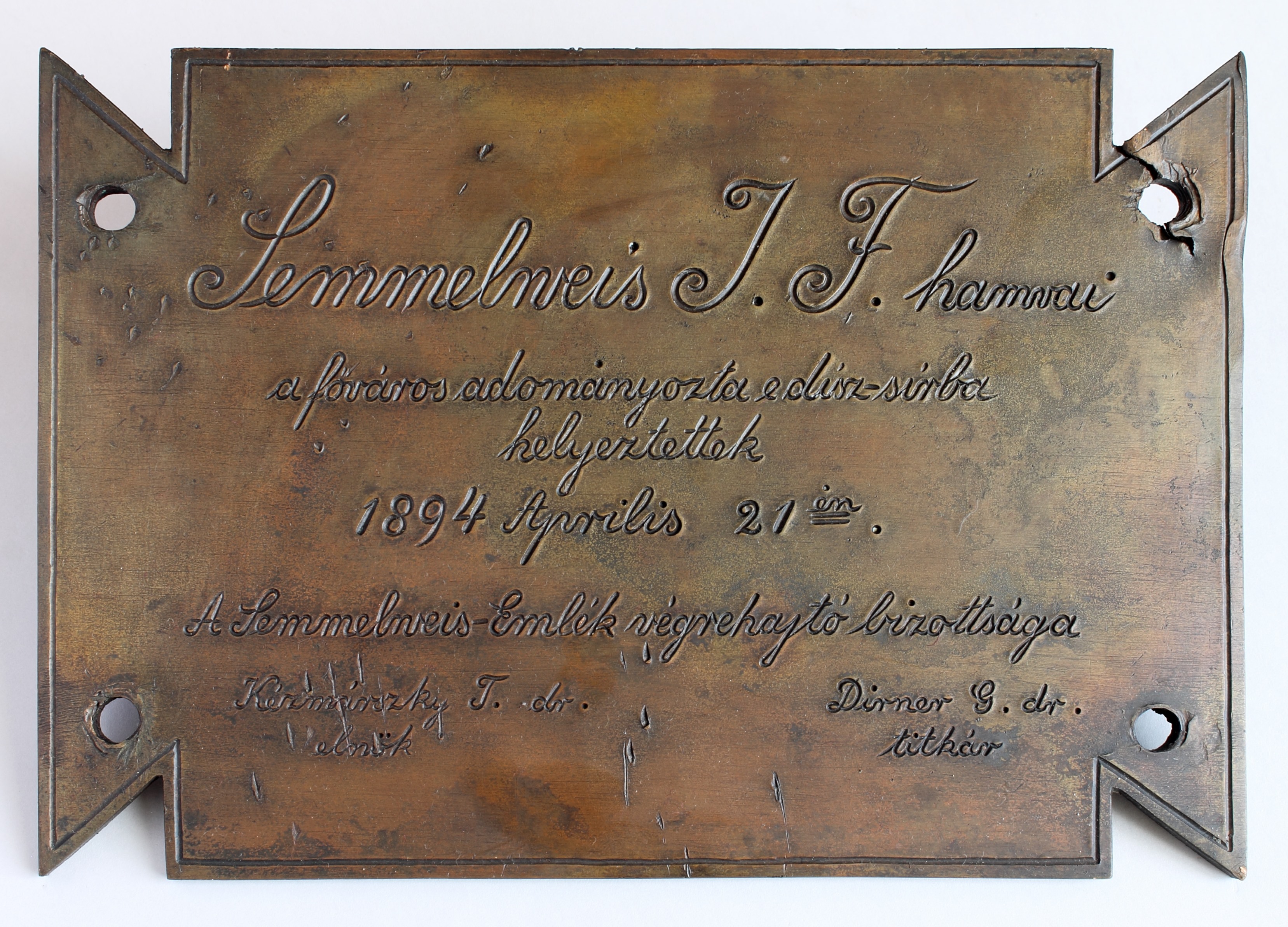 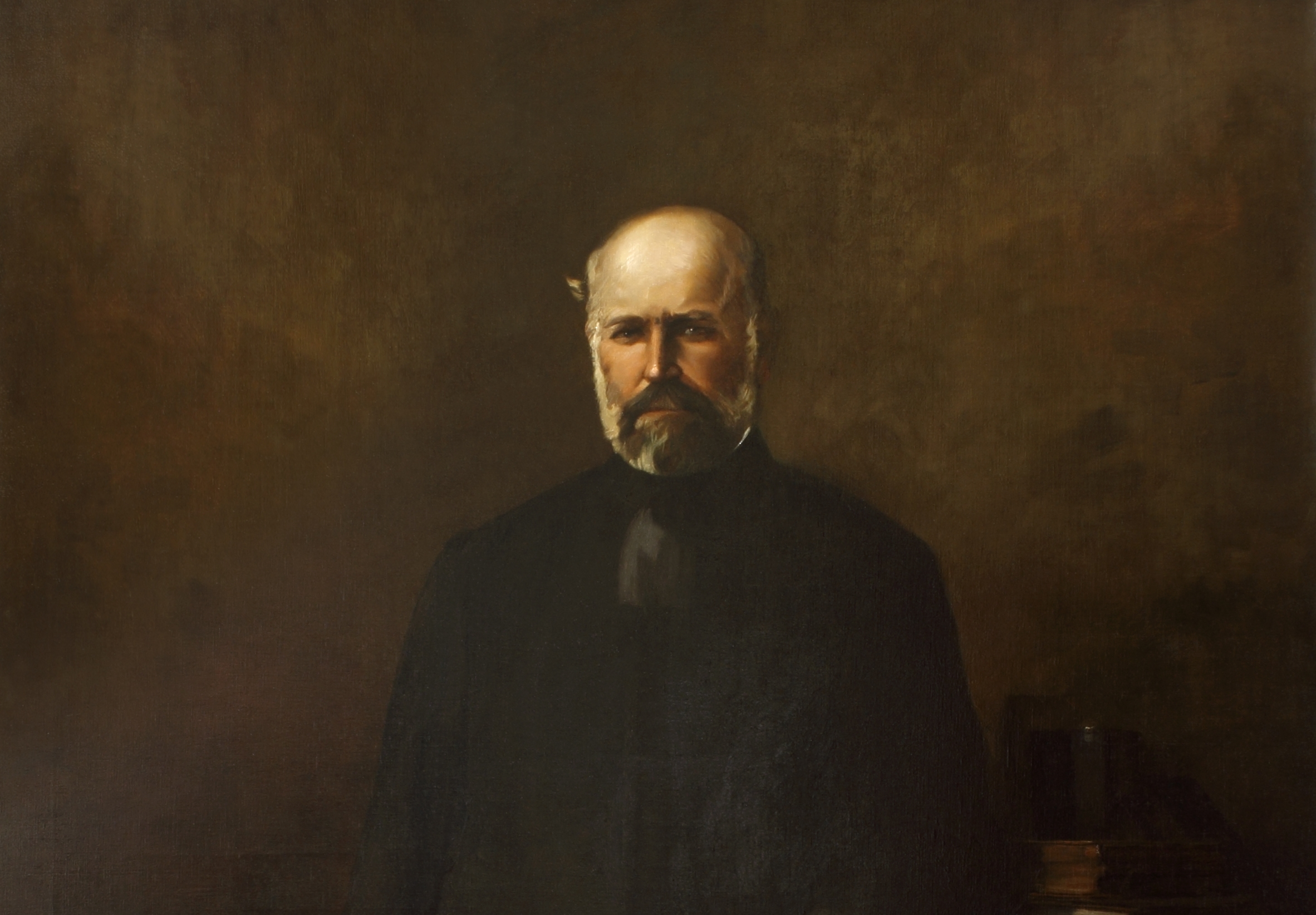 In the Sculptor's Studio: Alajos Stróbl and the Semmelweis Statue

›
In the Sculptor's Studio: Alajos Stróbl and the Semmelweis Statue 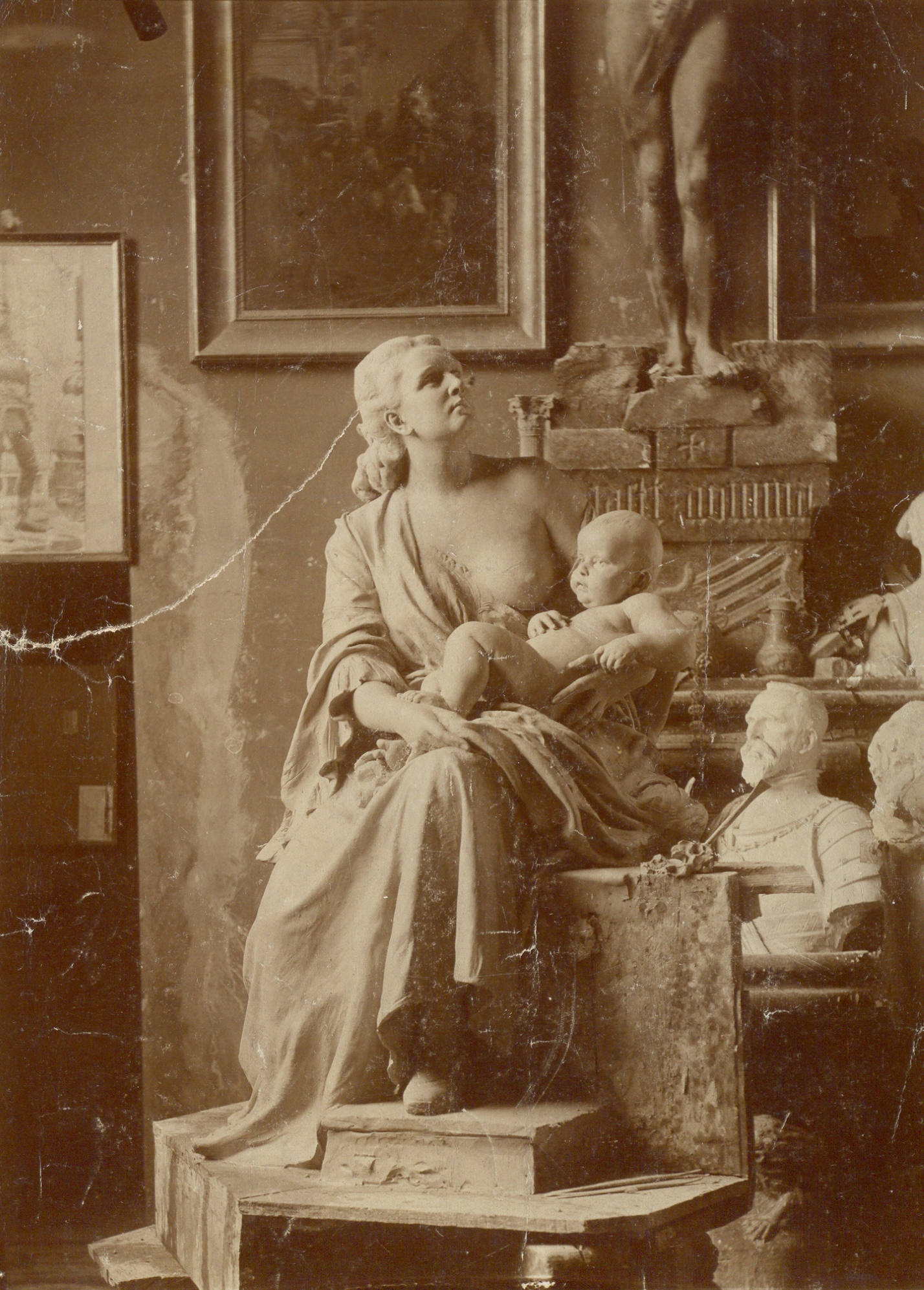 The leading figure of Hungarian sculpture at the turn of the century, Alajos Stróbl used a photography from 1863 for portraying Semmelweis’s figure, putting a book in his left hand, as requested. The woman’s figure and her infant were modelled after his own wife, Lujza Kratochwill and her son. The column-like stand on the limestone pedestal is surrounded by children holding some oak foliage in their hands. The statue’s inscription was simply SEMMELWEIS, as requested by the Committee. The plaster models made for the statue were in Stróbl’s studio in Epres Garden for a long time in order to serve the education of the students of sculpture. Seven members of the Royal Medical Association bought the model of the woman’s figure from Stróbl with their own money and donated it to the Association. The plaster model was installed in the ceremonial hall of the Royal Medical Association in Budapest in 1923, and after the closure of the Association, it was transferred into the Semmelweis Room of the Medical University of Pest. 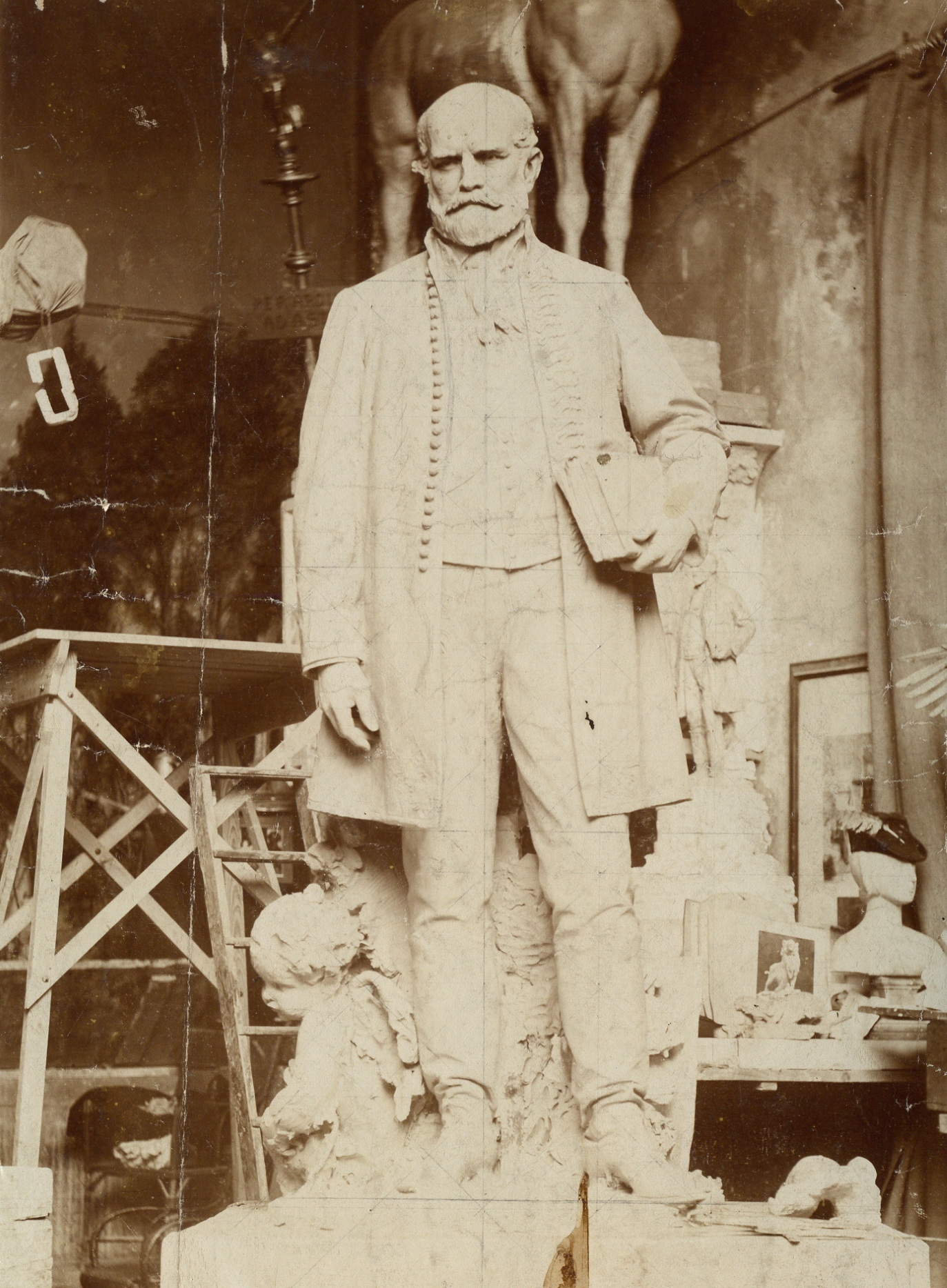 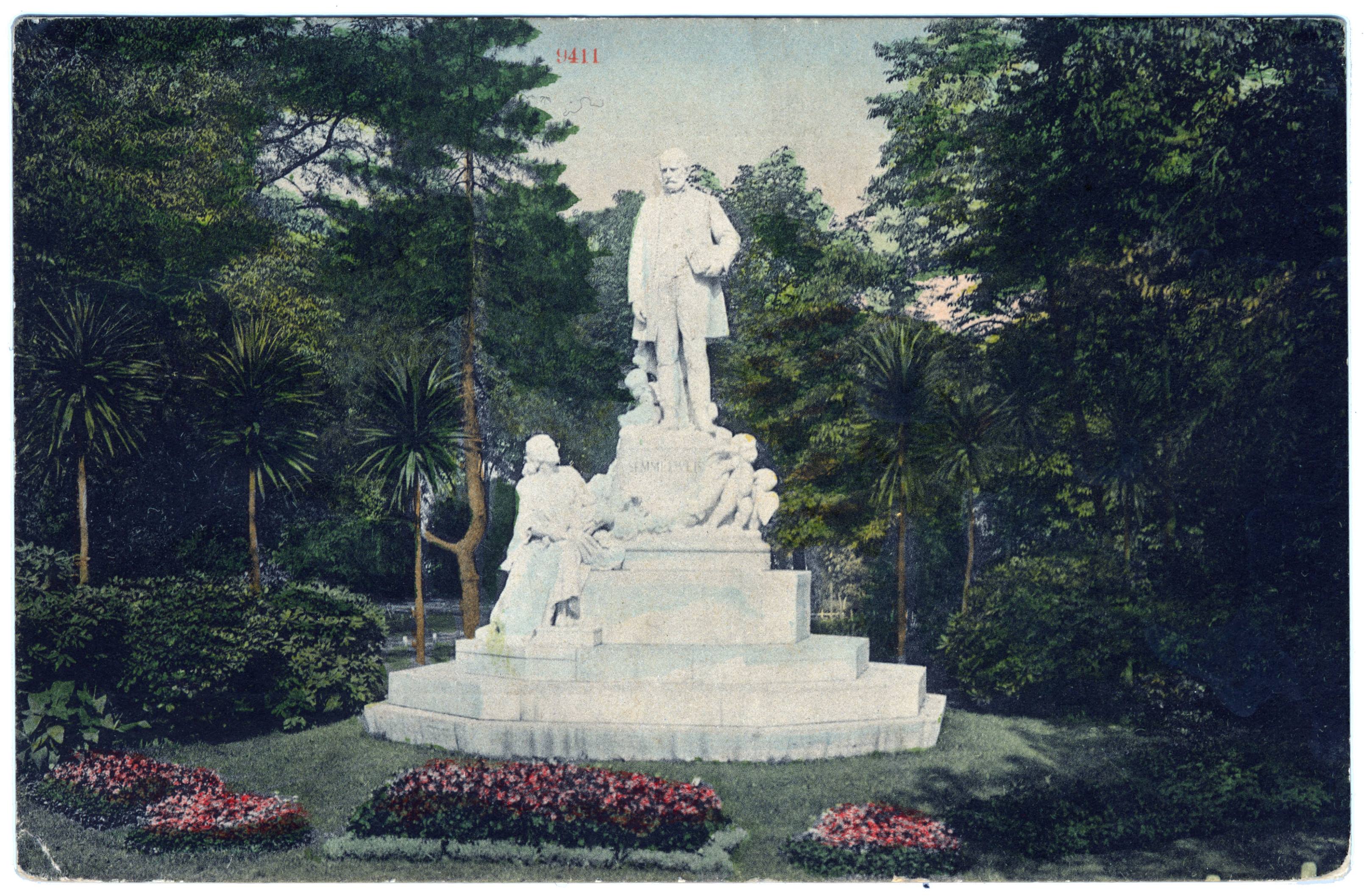 One of the long-term plans of the Semmelweis Memorial Executive Committee, established in 1891, was to commemorate his figure with a public statue installed in the right place. Around 1901 there was already enough money in the international fund of donations for the preliminary work to be started. János Fadrusz (1858–1903) was commissioned with providing the plans, but the artist’s death interfered. In 1903 a new contract was signed with Alajos Stróbl (1856-1926), who moulded the first version of the statue by 1904. The Committee, however, did not like his plans and in their general assembly on 2 March they formulated some instructions for the artist. These requested that the figures of Semmelweis and the woman should not be in the same plane and Semmelweis should appear with a book in his hand, dressed in Hungarian clothes. The woman with her child – as an allegorical figure –should express through her gesture the gratitude of the world’s women.  Her clothes should be poetic and definitely not Hungarian as not only Hungary’s women are grateful to Semmelweis.  The requirements were accepted by Stróbl, and the final contract was signed in June 1904.  Sróbl travelled to Carrara in July 1906 in order to carve there the final work that arrived in the capital by train in the last minute. The statue was unveiled on 30 September 1906 during a grand ceremony with significant international guests in Erzsébet Square, Budapest. After World War II, when the construction of a coach station started in the square, the statue was transferred to its present location, the square outside St Rochus Hospital (1948), which was in agreement with the original ideas of the Memorial Committee in 1893.